Exhibit 2-7: Bias in the 2004 Presidential Campaign

Four different polls conducted in the last days and immediate aftermath of the 2004 presidential campaign discovered that more voters saw the media as biased in favor of Democratic candidate John Kerry than Republican George W. Bush. Polls by the Pew Research Center and Gallup in the final weeks of the campaign found twice as many thought the media had been biased in favor of Kerry than saw a pro-Bush tilt. An Election Day survey of voters in 12 battleground states also found one out of every three voters (32 percent) thought news coverage was biased in favor of Kerry and the Democrats, compared to just 14 percent who thought the media were slanted in favor of Bush and the Republicans. And a Pew Research Center poll conducted after the election found that 40 percent of voters believed that media coverage of President Bush had been unfair, compared to 31 percent who thought Senator Kerry's coverage was unfair. 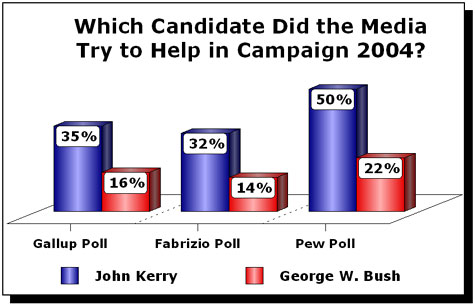