A pair of Rasmussen surveys conducted in mid-July 2007, each of approximately 1,000 adults, documented how Americans perceive various television news outlets and major newspapers. The first poll found a plurality of Americans see a liberal tilt at ABC, CBS, NBC, CNN and NPR, while at the same time detecting a conservative bias at Fox News. The second poll, released one day later, discovered that most Americans saw the New York Times, the Washington Post and their own local newspaper as tilting to the left, while slightly more of those who saw bias at the Wall Street Journal thought it favored conservatives (22%, vs. 18% who saw liberal bias at the Journal). 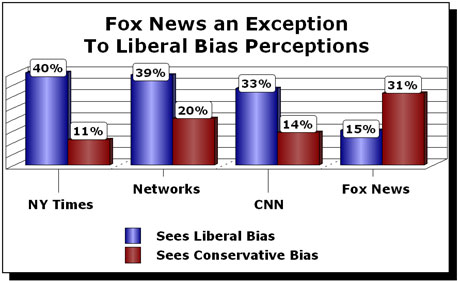