Two polls conducted in 2007 found the public generally thought the media's coverage of the war in Iraq skewed in a negative, pessimistic direction. A March 5-11 TIPP poll of 900 adults done for Investor's Business Daily found the public judged the media's war coverage as 'neither fair nor objective.' A Pew Research Center analysis published August 9 found a big drop from 2003 to 2007 in the percentage of Americans who said they were 'confident' that they were getting an accurate picture of how the war was going, with Republicans much more trusting of statements from official military sources, and Democrats preferring the media's message. 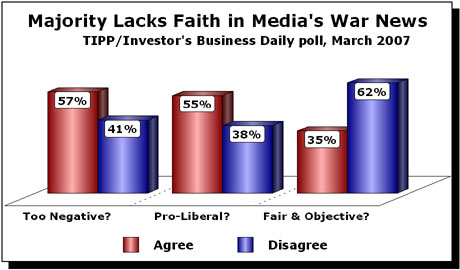