In April 1996, the Freedom Forum published a report by Chicago Tribune writer Elaine Povich titled, 'Partners and Adversaries: The Contentious Connection Between Congress and the Media.' Buried in Appendix D was the real news for those concerned about media bias: Based on the 139 Washington bureau chiefs and congressional correspondents who returned the Freedom Forum questionnaire, the Washington-based reporters — by an incredible margin of nine-to-one — overwhelmingly cast their presidential ballots in 1992 for Democrat Bill Clinton over Republican incumbent George Bush. 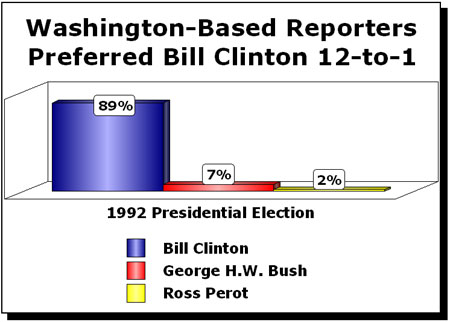 Previous: Exhibit 1-8: The Media Elite Revisited
Next: Exhibit 1-10: Newspaper Journalists of the 1990s