In 1995, Stanley Rothman and Amy E. Black 'partially replicated the earlier Rothman-Lichter' survey of the media elite. (See previous entry, The Media Elite.) 'The sample of journalists mirrors that from the earlier study, including reporters and editors at major national newspapers, news magazines and wire services,' the authors wrote in a Spring 2001 article for the journal Public Interest. (Additional data was included in a 2009 paper by Northeastern University professor William G. Mayer, "The Political Attitudes of American Journalists: A Survey of Surveys.")

They found the media elite held strongly liberal views on abortion, homosexuality, and a range of economic issues. 'Despite the discrediting of centrally planned economies produced by the collapse of the Soviet Union and other Communist regimes, attitudes about government control of the economy have not changed very much since the 1980s,' the authors marveled. 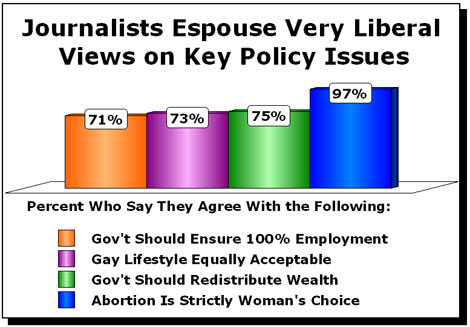