In March and April 2005, the University of Connecticut's Department of Public Policy surveyed 300 journalists nationwide — 120 who worked in the television industry and 180 who worked at newspapers — and asked for whom they voted in the 2004 presidential election. In a report released May 16, 2005, the researchers disclosed that the journalists they surveyed selected Democratic challenger John Kerry over incumbent Republican President George W. Bush by a wide margin, 52 percent to 19 percent (with one percent choosing far-left independent candidate Ralph Nader). One out of five journalists (21 percent) refused to disclose their vote, while another six percent either didn't vote or said they did not know for whom they voted. 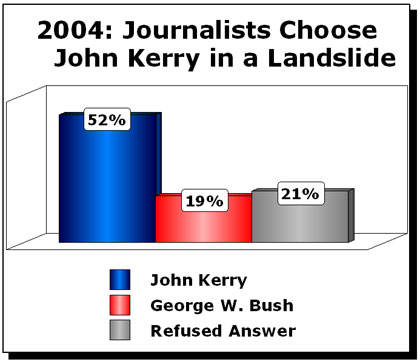