Exhibit 1-12: The People and the Press: Whose Views Shape the News?

In the July/August 2001 edition of the Roper Center's Public Perspective, Washington Post national political correspondent Thomas Edsall summarized the findings of a Kaiser Family Foundation poll of 301 'media professionals,' 300 'policymakers' and the 1,206 members of the public. The media professionals included 'reporters and editors from top newspapers, TV and radio networks, news services and news magazines.' The results showed that 'only a tiny fraction of the media identifies itself as either Republican (4%), or conservative (6%),' placing reporters far to the left of media consumers. 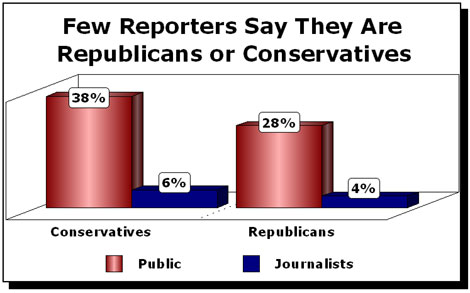